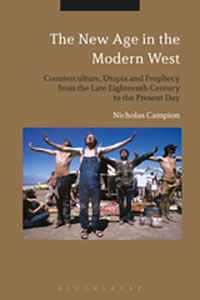 New Age culture is generally regarded as a modern manifestation of Western millenarianism – a concept built around the expectation of an imminent historical crisis followed by the inauguration of a golden age which occupies a key place in the history of Western ideas. The New Age in the Modern West argues that New Age culture is part of a family of ideas, including utopianism, which construct alternative futures and drive revolutionary change.

Nicholas Campion traces New Age ideas back to ancient cosmology, and questions the concepts of the Enlightenment and the theory of progress. He considers the contributions of the key figures of the 18th century, the legacy of the astronomer Isaac Newton and the Swedish visionary Emanuel Swedenborg, as well as the theosophist, H.P. Blavatsky, the psychologist, C.G. Jung, and the writer and artist, Jose Arguelles. He also pays particular attention to the beat writers of the 1950s, the counterculture of the 1960s, concepts of the Aquarian Age and prophecies of the end of the Maya Calendar in 2012. Lastly he examines neoconservatism as both a reaction against the 1960s and as a utopian phenomenon.

The New Age in the Modern West is an important book for anyone interested in countercultural and revolutionary ideas in the modern West.

“The New Age in the Modern Westis refreshingly well researched and even-handed. Taking an intriguing perspective on the New Age from the history of ideas, he includes it in the ”family” of ideas in Western culture that includes millenarianism and utopianism … [T]his book is a useful contribution to the academic study of the New Age and would appeal to scholars and students invested in this emerging disciplinary area.”
Nova Religio

“An excellent survey of the subject, setting it in wider and deeper historical and social contexts when compared with some earlier studies in this area.”
Kevin G. Tingay; Reviewed in the United Kingdom (12 August 2017)

“I found this a thought-provoking, even revolutionary book. It deals with predictions of Utopias and a coming New Age in a way which some people will find challenging – and will encourage them to reconsider cherished ideas. The key chapters deal with the 1960s, which the author makes clear was much richer and more complex than the usual obsession with the Summer of Love suggests, and the American invasion of Iraq in 2003, which went badly wrong partly because it was a misguided Utopian attempt to reshape the Middle East in America’s image. Well worth reading, and highly recommended if you want to understand the times we live in.
Paul Archer; Reviewed in the United Kingdom (15 August 2018)

The New Age in the Modern West

Counterculture, Utopia and Prophecy from the Late Eighteenth Century to the Present Day

2. End Times: Utopia and the Millennium

3. Enlightenment and Progress in the 18th century

4. The Theosophical Enlightenment in the 19th century

5. New Age and Transcendence in the 20th century

6. Myth and the Millennium in the Sixties

7. Counterculture and Utopia after the Sixties

8. Remaking the World: Neoconservatism and the Global Utopia