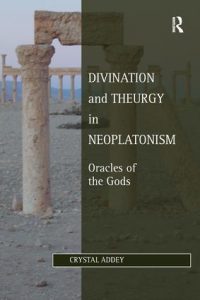 Why did ancient philosophers consult oracles, write about them, and consider them to be an important part of philosophical thought and practice? This book explores the extensive links between oracles and philosophy in Late Antiquity, particularly focusing on the roles of oracles and other forms of divination in third and fourth century CE Neoplatonism. Examining some of the most significant debates between pagan philosophers and Christian intellectuals on the nature of oracles as a central yet contested element of religious tradition, Addey focuses particularly on Porphyry’s Philosophy from Oracles and Iamblichus’ De Mysteriis – two works which deal extensively with oracles and other forms of divination. This book argues for the significance of divination within Neoplatonism and offers a substantial reassessment of oracles and philosophical works and their relationship to one another. With a broad interdisciplinary approach, encompassing Classics, Ancient Philosophy, Theology, Religious Studies and Ancient History, Addey draws on recent anthropological and religious studies research which has challenged and re-evaluated the relationship between rationality and ritual.

Reviews for the Harmony Debates

[T]he book offers a good interpretation of Iamblichus’ De mysteriis and a wealth of important observations on various details of the material. The new approach it proposes to the study of Neoplatonic rituals promises insights in the field of Neoplatonic religiosity well beyond Porphyry and Iamblichus. This is an important contribution to research on theurgy.

First an explanation of terms for those unfamiliar with the terms: if, as Plotinus asserts, ‘we are divine in origin and by nature’, then divination is the process by which that divinity is re-established, because divination is in ascertaining what the divine will is in a given situation, as distinct from one’s daimon who only tells us what not to do; or as the Adwaitin Shankara puts it, it is ‘Coming out of what we are not, into what we have always been, and will continue to be;’ theurgy literally means ‘God working’, that is working for God and God working through us, so it is a way of living if not a way of being, and it is worth pointing out that Plato referred both to the gods, and the God.[ cf. Genesis 3:21] The terms Neoplatonism and Neoplatonists are misnomers, but we seem to be stuck with them; what they actually refer to is the continuation and development of Platonic thought from Plato’s death (428 bc.) to possibly the death of Proclus in 485 ad. , and not just Plotinus, Iamblichus etc. The sub-title of the book is ‘Oracles of the Gods.’ Addey argues ‘that oracles and other types on ‘inspired’ divination were regarded by the Neoplatonists as fundamental aspects of their philosophy…More specifically, for Porphyry and Iamblichus, oracles constituted symbols of the gods, which comprised tools for philosophical contemplation, insight and initiation.’

Divination and Theurgy in Neoplatonism

Oracles of the Gods